“If we make one criterion for defining the artist… the impulse to make something new… — a kind of divine discontent with all that has gone before, however good — then we can find such artists at every level of human culture, even when performing acts of great simplicity.” – Margaret Mead

Following the threads of curiosity deeper into the realms of mediumistic art, and through my delvings into Outsider art , I came across  Anna Zemánková, a remarkable artist of organic, abstract compositions.

ANNA ZEMÁNKOVÁ, INFINITE FLOWER, FIRST HALF OF THE SIXTIES, PASTEL, TEMPERA, AND INDIA INK ON PAPER.

Zemánková began to paint regularly only when she was 50 to assuage the depression that engulfed her after years of repressing her own creative impulses. Like many women of the time, it was only after her children were grown and husband had died that she had the space to begin illustrating her rich inner world. She worked in the hours from four to seven in the morning, feeling that it was then she could capture magnetic forces. She drew in an instinctual, automatic way with no idea of the final shape the work would take, saying, “It all works by itself … there is no need to think.”

Like the two abstract pioneers  I have written about previously – Georgiana Houghton and Hilma Af Klint, Zemánková entered a trance-like state to produce her work. She felt that her work came from ‘a divine source.’ According to curator Annie Carlano, in the book Vernacular Visionaries: International Outsider Art, it does seem likely that Zemánková was channelling some sort of spirit or energy in her work. The Moravian culture is steeped in folklore and traditional beliefs concerned with spirits and otherworldly beings.

Like Pamela Colman Smith, Zemánková’s drawings were influenced by listening to classical music, in a state between dreams and waking. She used tempera and dry crayon which she “softened” with cooking oil and complemented with pen and ink.

Continual dissatisfaction forced her to seek new materials and methods, and over the years, Zemánková’s work underwent dynamic development.After 1969, she began to develop new techniques of working with the surface of the paper, perforating, crimping, pressing and embroidering, as well as using crochet and textile appliqués, glued pearls, and glass beads to create relief collages. Techniques, which she had used earlier for decorating her home and clothing, now became an integral part of her work.She had always been drawn to folk art and tales, dressing her children in traditional Moravian folk costumes and clothes reminiscent of fairy tales, creating toys for them, decorating their rooms and making up fairy tales with great skill. Her drawings have elements of folk embroideries, paintings on church pews and doorposts, and ornamental ceramic glazes dating from the 18th-20th centuries though she reworked these motifs in a manner unfamiliar to and divergent from that tradition. “Her graphic ability to combine is amazing. She juxtaposes things that are, at first sight, incompatible. The images and forms that come as a result bear the stamp of mediumistic inspiration. It is the automatism of creation and the faith in spiritual contents of reality, reflected in her work, that she has in common with the mediumistic works of art.”   –  Nádvorníková, A. : l´art brut – umění v původním (surovém) stavu, Praha, GHMP 1998, s.55

For the artist herself, the truth was as simple as it was profound:

I see something, a sort of deep feeling inside, it stays with me and later, I put it onto paper.
–  Anna Zemánková, 1980 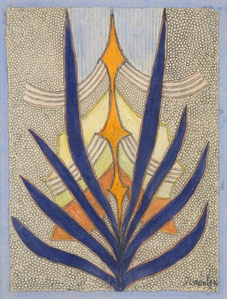 One thought on “Illustrating the Inner: The work of Anna Zemánková”