“Suddenly, for a time, the door is open, the magic is working; a channel exists between the page and the shadowy cave in the mind.” ~ Susan Cooper

The Alchemist by Rima Staines

One very hot summer, I went on a journey to meet an artist I have long admired. The artist had put out a call for people to gather so she might guide them to open portals to the Otherworld through their artwork. She would help them to “hone the heart-rooted elf-sight that we all once had as children”. The workshop Iconography of the Otherworld, took place in a small village in Devon, and my first port of call was to spend time with another wise alchemist and magical maker of wondrous, sacred jewellery, Jade Moon. See her work at Earth Smoke Bone Song, here.

Ten answered the call to gather in a quiet church hall for a day of wonder and creative unfurlings. Rima began by sharing with us a little of her own creative processes. She is often asked where her images come from. People who have been moved deeply by a particular artwork, often cannot say quite why, and want to pin the feeling down.  Rima did her best to relate something that is largely beyond the capacity of words. She described it as a particular quality – a ‘crunchiness’ – that is beyond the surface image. Using paint, wood, word, music, animation, clock-making, puppetry & story, she attempts to “build a gate through the hedge that grows along the boundary between this world & that.”

She often uses music to open the portal. She played us Robin Williamson’s Five Denials On Merlin’s Grave from the albums A Glint at the Kindling / Five Bardic Mysteries, a mythic piece with lines such as:

furred with wolf pity, honeyed as the claws of bears…tree truthful looters along time’s inches…a winding music, keening and exultant through the green drum of the hills…

words that make your skin prickle, and your spirit soar. Listening again, we moved to our tables and began to draw, or rather to let the pencil move over the paper bringing forth the magic from the feelings evoked.

My own piece had images I recognized from ancient myths and legends of Wales – the cauldron of Ceridwen, the skeletal head of the Mari Lwyd.

On the other side of the paper we drew portraits, an exercise in close observation, but also in an attempt to capture something of the essence of the other person, the soul within. 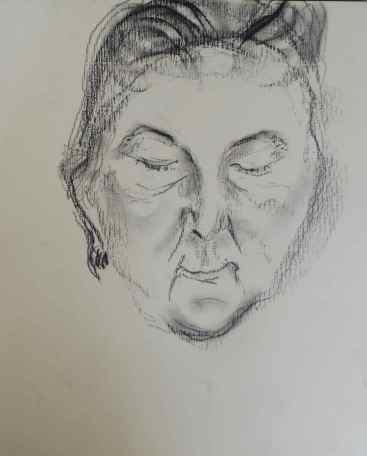 We gathered to observe Rima bringing to life a drawing she had made on a piece of sanded down and primed wood. She showed us how she mixes and applies the oil paint in thin layers, gradually adding detail and building character. 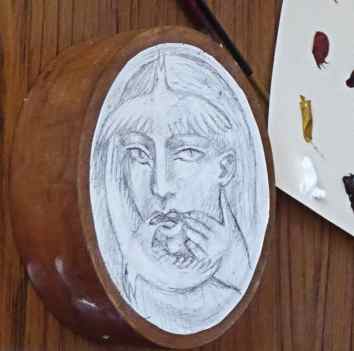 Rima often paints onto wood as she loves how the grain enhances and combines with the painting. She brought along one of her fabulous clocks, and one of her well know pieces, The Weed Wife.

Attending this gathering of artist-seers has helped to set my feet more firmly on my creative path after a long period of experimentation and shape-shifting. I have learned that my creativity is linked to healing, and the story of the being that emerged onto my own wooden canvas is both sad yet redemptive, as such heart-felt things often are. But more about that another day. 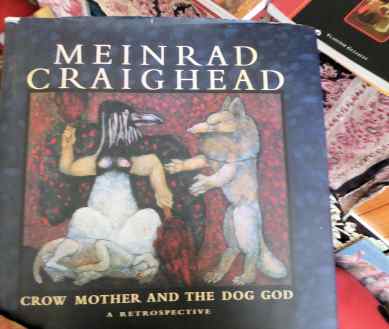 A selection of reference books from the workshop