This is an important exhibition because it showcases the work of one of the pioneers of abstract art, providing insight into extraordinary, and largely unacknowledged creative innovations that were occurring in the middle of the nineteenth century.

In 1906, Hilma Af Klint from Sweden verifiably created her first abstract painting – at least four years before the ‘founding fathers’ of modern painting  (such as Wassily Kandinsky.)  Georgiana Houghton in England, and Emma Kunz in Switzerland were also developing their own abstract visual language, highly charged with meaning. All three women strove to make manifest immaterial messages from higher, spiritual realms. As Althaus et al state in their introduction to the new publication: World Receivers:  “the analysis of their spectacular work, challenges us to question previously binding narratives about the genesis of abstract art in the modern era.”

Emma Kunz used radiesthesia as a drawing technique, where she would pose a question to her divining pendulum and discover the answer within the geometric drawing she made from recording the pendulum’s swings, starts and stops onto graph paper. She was known to work continuously on each drawing for periods that could stretch over twenty-four hours.Kunz sought to gain a greater understanding of nature and the world through these drawings, and her questions to the pendulum ranged from the political to the philosophical and personal.

Emma Kunz is the only one of the three artists mentioned above who did not receive any artist training. It was not until the age of forty-six that she began to produce large scale drawings on almost square-cut graph paper. She drew to explore the laws and forces of nature’s regularities. The starting point was her own body, as well as her concentrated attention to nature. She approached her healing practice in the same way. By completely surrendering herself to the energy flows, she directed the damaging forces onto herself, and transformed these into healing energies. There are astonishing reports of her healing successes. (World Receivers).

She used the pendulum as a stimulant. She often recounted that ordered systems of points had appeared before her inner eye. In tireless work, she expanded on a basic pattern, enriching it, consulting the pendulum and inner visions. At times it seemed as if the picture was completing itself outside of her own consciousness, as if her hands were being guided. When a work was finished, the painter stood in front of it filled with wonder and described what had been found – returning from distant depths, curiously astonished. That interaction between consciousness, conscious behaviour, and almost unconscious listening to the primal roots of existence (Muttergrunden), which is only found among genuine artists. (Henry Widmer: in Du Die Zeitschrift der Kultur) 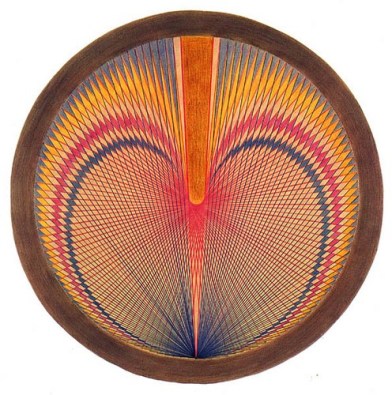