In Goncharova’s famous painting, The Cyclist, the figure is willfully heading in the opposite direction to that indicated by the pointing authoritarian finger.

It suitably sums up Goncharova’s spirit. A leading figure of the new avant-garde art scene in Russia, she defied convention at every turn.

Born in 1881, the same year as Picasso, Natalia Goncharova was a generation older than Lee Krasner, with origins very different to that of Krasner’s Jewish parentage.  From a family of impoverished aristocrats, Goncharova learned about the lives and traditions of the peasants who lived on the family estate, which was to become a great influence on her work.

The first modern artist to have a retrospective exhibition in Russia, Goncharova had previously been charged with obscenity and had her paintings confiscated for daring to paint the female nude so explicitly.

The breadth of her work is astonishing. Painter, printmaker, fashion and set designer, she also embraced and initiated art forms such as Rayonism. To indicate the diverse range of her work,  life-long partner, Mikhail Larionov coined the term ‘everythingism’.

She was one of the first Russian artists to perceive and value the high artistic merits of Russian national creativity, and some wonderful samples are shown in the exhibition. In Round Dance, 1910, for example, the artist imitates peasant woodcuts in paint. She portrays the peasants with faces like in icons, which has the effect of a attributing to them a saintly status.  She explained that ‘the need to go back to these naive forms of art, is necessary to find new forms’.

Folk art is not refined. But it is sincere, revealing the instinct of the tribe/community, the people unconsciously preserving the treasure of these primal concerns. Goncharova recognised this. She also recognized the power of folk tales and mythology, and her ground-breaking sets and costumes for Nikolai Rimsky-Korsakov’s opera The Golden Cockerel (1914), produced by Diaghilev as a part of the famous Saisons Russes in Paris, are based on the Old Believer lubki’s subjects and colour palette as well. 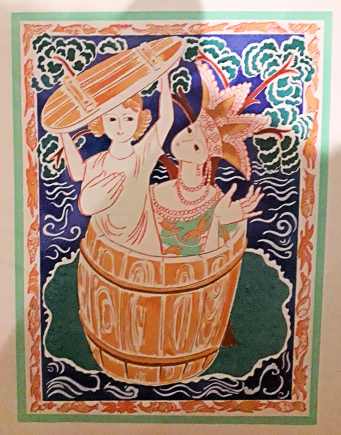 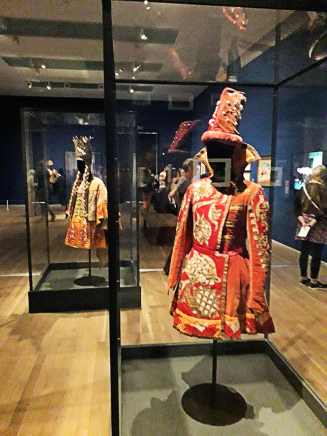 I got the sense that Lee Krasner (1908-84) was just as determined, radical and brave. She also refused to develop a ‘signature image’;  being restless like Goncharova, she continued to experiment with different styles and forms throughout her life. It was most important to her that her paintings emerged authentically from within.

“I like a canvas to breathe and be alive. Be alive is the point.”

The show at the Barbican gives a rich overview of her life and career from early self-portraits and life drawing, showing a progression into the abstract expressionist works for which she is known.

I was particularly interested in the ‘hieroglyphic’ images and her abstract alphabets, what she called her “mysterious writings”. They reminded me of Mark Tobey’s ‘white writing’ paintings:  dense, rhythmic nets of black paint over multicolor backgrounds or meticulously over-written in white like sacred scripts. 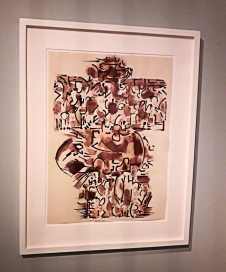 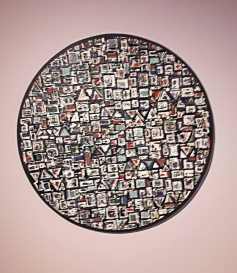 It was after her husband died and she was able to work in the barn space that she really found her artistic identity. Here she could work on an unprecedented scale, tacking lengths of canvas directly to the wall. She then produced her ‘Night Journeys’ series of paintings, made during chronic insomnia using organic, umber tones because she didn’t like using colour in artificial light.

Vibrant colours returned some years later in a shift from soft, biomorphic shapes to more hard-edged abstract forms. Palingenesis, titled after the Greek word for re-birth was something Krasner considered fundamental for her practice.

“Evolution, growth and change go on. Change is life.”

In another act of metamorphosis, she tore up work she wasn’t happy with and created astonishing collages from the fragments. 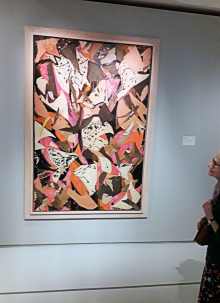 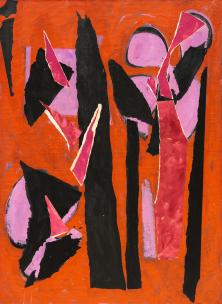 “Painting is a revelation, an act of love…as a painter I can’t experience it any other way.” 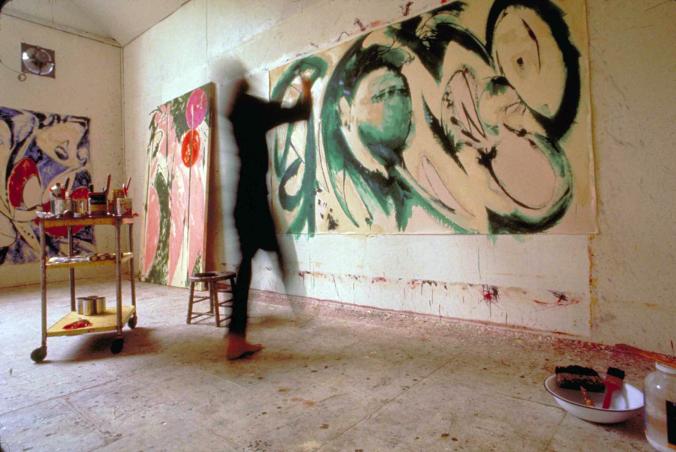