During lockdown, my brother, an artist working in Somerset, has made a series of drawings that I have been inspired to write short fiction pieces from. I will be posting them, and the corresponding writing here over the next few weeks.

Matt writes about the drawings:

” I don’t give them titles very often, I usually just date them sort of like a journal of that particular day. I suppose all I can say is that drawing makes me feel better so I use it as a therapy. It has helped me through some difficult times and the more I put in to a drawing the more it seems to give back to me which is amazing to me still. It helps me maintain some balance in my life.” 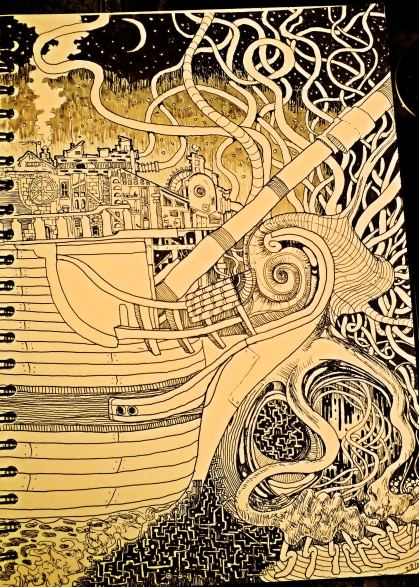 The Plan by Sarah Featherstone

The ship came in on the stroke of midnight. Soka was relieved – everything was powering down, and they desperately needed an infusion. The Oracle had been closing its eye a millimetre more each cycle of the moon, and without its vision, they’d never be able to spot the dronoids. They’d lost three Organics last quarter, one of whom was Soka’s cousin. Soka was pretty sure the cousin was alive, but didn’t like to think about what state they were in. You were warned when you joined that if you got caught, there was no way to get you out. Everyone who had tried had never been seen or heard from again.

Soka had heard the rumours about what the Tectalides were doing inside the enclaves. But when the Guardian had whispered the plan in Soka’s dream, Soka had no doubt. Some of the clan said it was suicide.

Don’t do it, Liardes had pleaded.

I have to, said Soka. I have no choice.

Liardes’ eye filled with liquid. It was strange to see, but Soka knew it meant Liardes  cared.

I feel that we will know each other again, Soka said, extending a tentacle to touch Liarde’s arm.

Liardes blinked, and the liquid spilled out and fell with a plop onto a scaly hand.

Perhaps that is what rain was like in the Anthropocene, Soka thought.